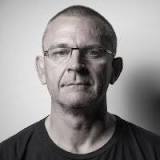 Matjaž Požlep (1960) was born in Ptuj, where he attended primary and secondary school and continued his studies in Ljubljana at the Faculty of Architecture. During his studies, he worked as a graphic editor of the Tribuna newspaper, in the 1980s he worked as a CAD manager in an architectural office in Milan and was responsible for the introduction of computer-aided design, and since 1991 he has worked as a co-founder and executive and creative director of Arxel Tribe (computer games), Komakino (production house), Propeler (production house) and Pakt Media (production house) in Ljubljana, Milan, Paris and Zagreb. He is the founder and CEO of Art Rebel 9 – they are pioneers in the creative use of advanced technologies, currently researching and applying new media (XR) and designing and implementing platforms and products in the fields of culture, tourism, industry and advertising. He is the recipient of numerous national and international awards.