We presented the latest works of Samantha E. Harvey, a video artist, who through techno-feminist perspectives of the 21st century, explores the concepts of the self.

A mixture of melting visuals, using augmented reality, mixed reality, photography, video, and lucid illustrations will take you into a world somewhere between the one you already know and a glimpse of the one existing in another dimension. Grappling with questions of physics, quantum, new technologies, social media, and modern-day living, Samantha brings us into her visions of our combining realities between various virtual worlds.

Works to be presented:

Mybody
Soundtrack: (reversed) Superconnected sleep by Soft and Furious
»A gentle pulsating rhythmic journey through the unconscious mind. Between a semi-conscious sleep state.«

Cyborg Afterlife (Premiere)
»Has the veil that we have entered into a cyborg’s world fallen? This video explores the possibility of quantum selves through the dynamics and filters of TikTok and Instagram as social media platforms that we now exist in. I can feel myself as a living, breathing human, but there are multiple parts of my thoughts and brain that I cannot quantify that also exists in this other abstracted part of my being. At the moment, there is a push and pull between the two because we do not have the proper vocabulary or understanding in our western language to make sense of our different versions of ourselves. I have found a peculiar coherence within TikTok’s community of expressing the way to travel through our fluid identities, yearning to share and be creative more naturally. This video comments on a quantum state of existing in social media’s realms; therefore, I have used the lengths of songs and ones available to me through TikTok and Instagram. I do not claim to own the copyright to any of this music or filters.«

Horiz_}n (Premiere)
Music: Sergey Cheremisinov – Crystal Echoes (public domain non-commercial license)
»This work is a visual poetic interpretation of the possibility of what might happen to the body and conscious awareness at the event horizon of a black hole.«

Insequential (Premiere)
VR performance in a video
Music: Urban Sunrise by Steve Bass (Creative Commons – Public domain)
»While I was walking along the street, and saw bright beams coming off my face, they were kind, but I could not move them. Somehow they were not part of this world, they were part of some pixelated reality that I could sense, but I could not see. Stuck to my face, my inability to see was distressing and caused anxiousness, not because I did not like it, but because I was not used to it. In this situation, my dense body was coming up against this lighter pixilated metaverse of distorted other realities, distracting, strange, interconnected but separate. Somehow I cannot learn through it; there is a resistance. It cannot mesh with what I know feels ‘normal,’ a shift, a quantum leap into something else. Can the body physically resist it, or is this something that melts into every cell of ourselves and becomes part of our being. Our sense of perception is too slow, and when the changes happen, we only come to know of them too late, too slow, too heavy; we only blink, and time shifts occur.« 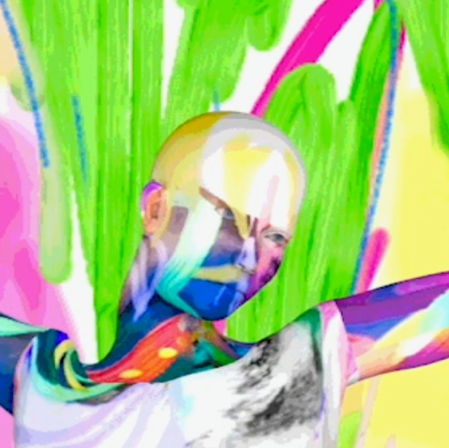